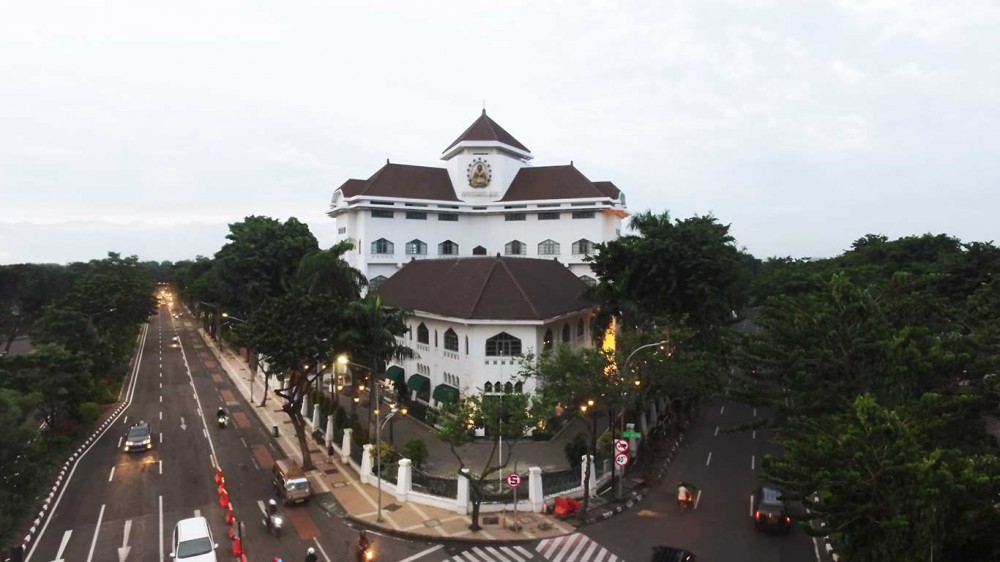 THE HISTORY OF GRHA WISMILAK BUILDING

Wismilak Building (1920s), Prior to the Independence of Indonesia

Grha Wismilak stood at the corner of Jalan Raya Darmo 36 and Jl. Dr. Soetomo 27 Surabaya. Up to date, the architect of this building remains unknown although it is estimated that Grha Wismilak was built in the 1920s as apparent from the photograph on a postcard of Jong Soe Hien publication. The building was situated at the corner of the intersection of Darmo Boulevard and Coen Boulevard, whose name was taken from Jan Pieterszoon Coen, the fourth and sixth Governor General of Dutch East Indies. His first reign was in 1619 – 1623, while the second reign was in 1627 – 1629.

Meanwhile, Darmo Boulevard 36 (now Jl. Raya Darmo 36) was owned by WILLEM  HUGO  LODEWIJK SAVELKOUL, the owner and head of Savelkoul company at that time. This company owned a number of (the most luxurious) men’s clothing stores in Amsterdam and Batavia.

Wismilak is fortunate since one of the history makers of this building, Mr. Oei Hian Hwa is still alive. Despite his old age (96 years old), he remains enthusiastic with a very strong memory. Accompanied by his grandchild, and sometimes a walking stick, he walked down the stairs of Grha Wismilak with an eagerness to tell the story of this imposing structure.

In 1936, when Mr. Oei Hian Hwa was 22 years old, Grha Wismilak building was dubbed Toko Yan or Yan Shop, a branch of Toko Piet (a shop which was later known as Toko Metro) on Jl. Tunjungan. “This building once housed 26 people in its attic because it was made as some kind of a mess hall for the employees of Toko Piet and Toko Han; especially for those who had no family, like me. There were four rooms with the front side used as a place to play table tennis. The bottom floor was used as a shop while the side yard as a badminton field,” he explained. As an administration clerk, to his knowledge, Toko Yan rented the place monthly from someone named Han Sing Kien who lived on Jl. Ngemplak, which is currently the headquarters of the Surabaya City Garrison. Mr. Hian Hwa described the building’s history in details with the help of a city map prepared beforehand.

Some time before the Japanese entered Surabaya in 1942, Toko Yan was closed down. The items that were still available were bought on a ‘bill’ by the Dutch around Coen Boulevard (now Jl. Dr. Soetomo). “The rest of the items, the owner said, could be taken by the employees. Then, when a bomb was dropped from a Japanese plane in Tegalsari, Tunjungan and Ngagel and exploded, people were panicking and the situation was chaotic. Electric trams were not working, there was no becak(a traditional tricycle) and all people filled the streets with bicycles trying to run away”, Mr. Hian Hwa reminisced. He then moved to Bothstraat (now Jl. Wahidin, Surabaya).

Mr. Hian Hwa remembered that there was an electric tram stop in front of Toko Yan. “The one from zoo direction was across the street, while the one from the direction of Jl. Urip Sumoharjo now was in front of the building,” he said. There were also bougainvillea plants around the boulevard.

“Around the building, on Jl. Darmo now, there used to be a shoe store and laundry store owned by a Chinese. Then there was a Smith’s store or greenhouse, there were two kinds of store. In the night, the place was used as a dance hall while in the day as a florist called Martha’s. At that time, the Dutch who lived nearby used to really loved the flowers; hence, everyday there were always fresh flowers on the tables,” he recalled the shop’s old patrons’ habit. “Then, when the Dutch wanted to rest, they would go to a place where now stands Darmo Hospital, but, it was not a hospital at that time.”

An interesting piece of information was that there used to be gas street lights. “To light them, you only need a long piece of bamboo. So, you rode a bicycle and you knocked the lights as you passed them. The lights would then went on. I also remembered that there was a gas station in front of a shop at the end of the road (now a police station),” he said while smiling.

Mr. Hian Hwa then arrived at the wooden staircase. “I used to walk up and down this staircase several times a day. Oftentimes I ran,” he said..

Mr. Hian Hwa walked from room to room slowly while remembering. “This used to be my room, I slept there. Behind this room, there were a bathroom and a squatting toilet,” he said while pointing to a room. “The door and the windows have always been slated, just like nowadays, but I’m quite surprised that the wood floors have been scrubbed clean.” True to his words, the building’s second floor of has been renovated and the wood flooring has been re-polished.

When Surabaya fell to the Japanese in 1942, the building was taken over and functioned as a Japanese police station.

And then, after the independence of Indonesia, the Indonesian police continued using the building as their station.

On August 21, 1945, Surabaya Special Police (Tokubetsu Keisasutai), led by Police Inspector Moh. Jasin proclaimed themselves as the Police Force of the Republic of Indonesia. According to the Ultimatum of General Mansergh, Arek-arek Surabaya (the People of Surabaya) must surrendered the weapons seized from the Japanese and put them in front of this building

Thus written on a stone slab in the lobby of Grha Wismilak. Surabaya citizens generally recognize Grha Wismilak as a former police station, which is not a wrong assumption as the building does have its own historical value for the Indonesian National Police (POLRI). In fact, the proclamation and existence of ‘Special Police’ (which currently becomes the name of the street across Grha Wismilak) were carried out before the establishment of POLRI.

Yousri Nur Raja Agam MH, a historian who wrote “Proklamasi Polisi di Surabaya Mendahului Hari Lahir Polri” (www.rajaagam.wordpress.com) (Police Proclamation in Surabaya Preceded the Birthday of POLRI) stated that when the fleet of Alliance warships landed in Tanjung Perak, Surabaya, on October 25, 1945, the situation in Surabaya was very tense. In addition to the youths who joined the PRI (Pemuda Republik Indonesia) and BKR (Badan Keamanan Rakyat), the police also had a decisive role before and after the Proclamation of Indonesian Independence on August 17, 1945. When the flag incident occurred on September 19, 1945, the police moved quickly and they merged with the masses.

In fact, aside from the general police, there were the highly respected Special Police force in Surabaya, an organization of the Central Special Police (CSP). In August 1945, only the police who still held weapons since after Japan surrendered unconditionally to the Alliance, the Japanese authorities in Indonesia dissolved the armies of PETA and Heiho. Japan then returned the youths who were trained in the PETA (Pembela Tanah Air) and Heiho armies, and their weapons were disarmed. As the police played a special role in the society, this condition was then used to strengthen the public. In the book entitled “The History of Police in Indonesia” it is stated that in Surabaya, the Commander of Special Police of East Java, Class I Police Inspector (Iptu), Moehammad Jasin, proclaimed the status and position of the police on August 21, 1945.

In old Indonesian spellings, the Police Proclamation was written as follows:

(“To unite with the people in the fight to protect the Proclamation of August 17, 1945, we hereby declare the Police as the Republic of Indonesia Police”.)

Below it, there was another sentence: Soerabaja, 21 Agoestoes 1945. Atas Nama Seloeroeh Warga Polisi: Moehammad Jasin – Inspektoer Polisi Kelas I. (Surabaya, August 21, 1945, On Behalf of the Entire Police Personnel: Moehammad Jasin – Class I Police Inspector.) Hence, the Indonesian National Police was born in Surabaya preceding the official presence of the police in Indonesia which was on July 1, 1946, the date that is later commemorated as Bhayangkara Day.