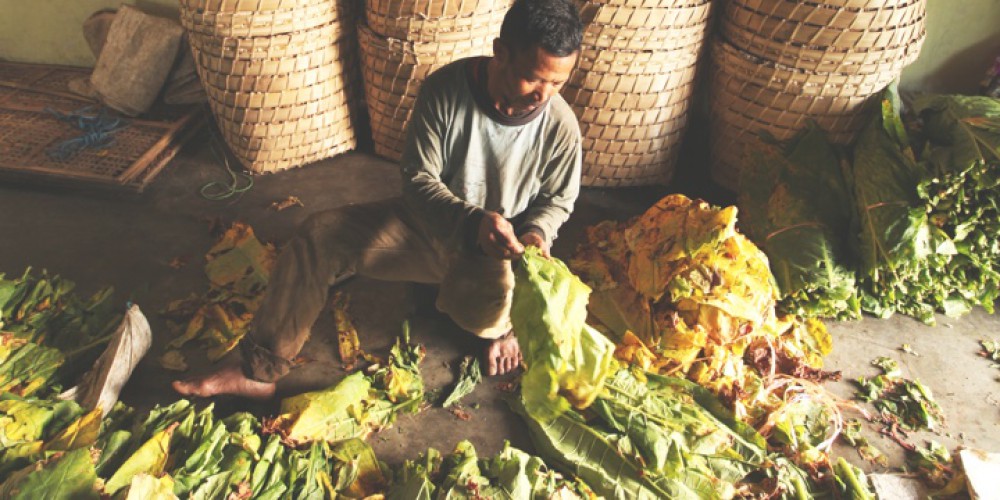 Tobacco plants (Nicotianae tabacum l) cultivate for its leaves used. Tobacco can reach a height of 180 centimeters (6 feet). The leaves are large, wide and tapered up to reach 30 centimeters.

Tobaccos have been planting around since prehistoric times. In 2010, paleontologists from the Meyer-Honninger Paleontology Museum found a small beam of fossils of tobacco on the Maranon river in northeastern Peru. The fossil is estimated to be 2.5 million years old.  The species that have value selling is Tabacum L Nicotianae and Rustica Nicotianae.

Nicotiana rustica L normally used to create abstract Nicotiana tabacum L alkoloid while in general is used as a raw material for the manufacture of cigarettes.

Tobacco as we know it today is approximately have been known and used by Native Americans 6000 years BCE. They planted tobacco, dry it and use the pipe for medicinal purposes as well as the usefulness of the healing ceremony disease.

After discovering the Americas October 12, 1492, Christopher Columbus, take a few leaves of tobacco to Europe. But most Europeans are not able to ' feel ' the tobacco until the middle of the 16th century. Tobacco began after a famous adventurer and diplomat named France's Jean Nicot popularized it in the twentieth century. From his name the word ' nicotine ' (main content of tobacco) is taken.

The tobacco plant in Indonesia is estimated to be carried by the nation of Spain or Portugal in the 16th century. However, the tobacco might be planted and grow in several areas in Indonesia who have never approached the Portuguese or Spain.

The success of planting tobacco in Indonesia is heavily influenced by the climate: rainfall, humidity, and temperature of shines. The most important of all is the rainfall. Tobacco dry season (VO/Voor-Oogst) have thicker leaves than tobacco wet season (No./Voor-Oogst). Tobacco dry season/Voor-Oogst (VO) is usually to make cigarettes; whereas tobacco rainy season/Na-Oogst (NO) is usually used as the raw material manufacture of cigars. Optimum temperature for the growth of tobacco is among 18 – 27 degrees Celsius. When tobacco has dried, tobacco can be chewed, rolled up, and smoked, or made of pasta.

The consumption of most tobacco leaves are dried, rolled way, burned and smoked. The way called 'smoke'.

The habit of smoking tobacco already can be found in Java since the 17th century. Generally for its own interest, by wrapping tobacco with 'klobot' (the dry corn’s ears), Javanese man enjoyed kretek. But unlike the habits of other nations, Indonesia's firstly tobacco will be sliced, dried, mixed with cloves, and rolled with paper. That's the way smoking clove cigarettes.

Talking and discussing about kretek, it cannot be released from the name Hajji Djamhari from Kudus. One day, the end of the 19th century (1870-1880), inadvertently, Hajji Djamhari adds cloves into hand-rolled tobacco. Magic! After draw on hand-rolled tobacco with clove, a disease he suffered in his chest was diminished. From there, people start to follow in his footsteps clove cigarettes increasingly widespread.  The term ' kretek cigarette ' was due to the results of the sound of a clove cigarette when it smoked.

The other most famous in its time was the Mas Nitisemito (1863-1953). He started the business of kretek in 1906 and glory in about 1930, through the product ‘Bal Tiga’ (Three Ball). Nitisemito brought kretek from personal used to industry.

In East Java, 1909, kretek began to develop in the area of Blitar and the surrounding areas, such as Kediri and Tulungagung along the valley of the Brantas River. Finally in 1962, Koen Lie Lie (Wisman Ali) with Hok Oei Bian (Budiono Widjajadi), founded the kretek factory of PT. Gelora Djaja in Surabaya which produces clove cigarettes with high quality.